The Destiny beta came and went. I surprised myself and Babe by actually playing it myself rather than sticking to the vicarious gamer role that I embrace with pride. I was able to play with my sister from another mister and prove that I really have no skills as a FPS player. (I kept looking for the Starman so I could become invincible, maybe that is only available in the full version of the game?)  But, honestly, I had a lot of fun playing it. Mostly because I liked to dress up my character and use that space magic.

Oh wait…this is a crafting blog, isn’t it?

Anyway, one of the things that was revealed during the Beta was the Iron Banner. People got decked out in some killer threads. I mean, check out the fierceness.

I had picked up some felt banners over at Jo-Ann about a week earlier and knew what I had to do.

I made a shoddy template and set to tracing it over to some adhesive felt.

It was…ok. But, as you can see from the picture, I drew the pattern on the front rather than to back and no amount of bleach was going to get those marks off. (Believe me, I tried.)

So, I set it aside for a couple of days. Then, awesomeness popped up on my Twitter timeline, courtesy of Hedge. His masterful artwork gave me a bit of detail that was missing from the original lo-res image I used to make the original template.

I redrew the template (on the backside of the felt) and set to work.

Ta da! Overall, I was thrilled with the way this ended up turning out. I’m pretty sure I’m going to do something like this for the Christmas cards I’m sending out this year.

My other craft, however, continues to haunts me. *insert rimshot*

The other craft is a Ghost that I made for my buddy, Alan’s, birthday. I made 3 (ok, like 6) different versions of the Ghost pattern and let the power of the people (aka Twitter) decide which one looks best.

Then, I set to work on the little guy.

It started off pretty well. I felt confident and unstoppable! This Ghost was going to look so perfect, people would expect for Peter Dinklage’s voice to start talking from the fabric. 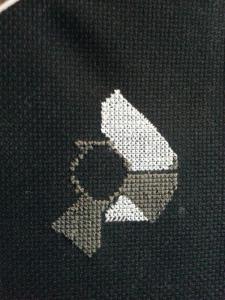 Then, the trouble started. I needed to tweak the pattern, I miscounted squares (thrice), I had to exchange a color because you couldn’t tell the difference between the other color, and then there were the broken threads that were so totally symbolic of my broken spirit.

I cried and wept. (OK, I more like pouted and fought the urge to throw the project in a bonfire.)  And then, I dusted myself off because we crafters are a tough breed.  I pushed through and finally finished the bad boy. 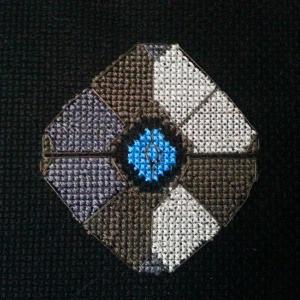 YAY! IT WAS DONE! ALL THE STRESS WAS OVER! WHAT COULD POSSIBLY GO WRONG?

Oh foolish Jess, when will you learn that when it comes to Destiny projects, something can always go wrong? So, apparently, when I was moving the cross-stitch from my big giant hoop to the hoop that would be its permanent home, I flipped it on its side. WHO DOES THAT? If I hadn’t been in the car, I would have been headdesking for hours.

Now let’s remember I already trimmed the fabric so there’s nothing for me to grab to tighten it. But I thought since I didn’t glue it down (I never do.) and was really careful, I might be able to spin the top hoop (carefully) so the right position.

Spoiler alert: I managed to do it.

But now that I’m thinking about it, I’m not sure that I didn’t put it completely upside down. Um, I guess I’ll have to wait for it to show up at Alan’s. Seriously guys, why does Destiny hate cross-stitching? And most importantly, when am I going to learn that Destiny hates cross-stitching?

Now it’s back to the Dark World. 11k squares in 26 days. I should have this sucker done.

One thought on “That Craft That Came From the Moon”

Find me on the internet

Saw it. Liked it. Had to cross-stitch it.